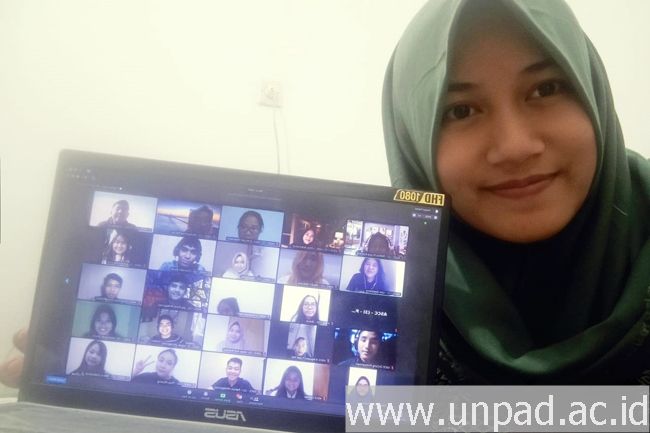 Rellisa Puspa Kusuma, Unpad Information Technology student taking a picture of herself while participating in the 2020 ASEAN Youth Conference.*

[unpad.ac.id, 05/11/2020] Unpad Information Technology student, Rellisa Puspa Kusuma, became one of the delegates in the 2020 ASEAN Youth Conference which was centered in Hanoi, Vietnam on last October 31–November 1.

The ASEAN Youth Conference is an annual activity held by the ASEAN Youth Organization to bring together young people from Southeast Asia. Meetings were held to discuss various social issues, initiate joint projects, and build networks.

This year, as many as seventy participants from various countries in Southeast Asia attended this conference.

As a result of being constrained by the pandemic, this year’s ASEAN Youth Conference was held online. Rellisa and participants from outside Vietnam attended the meeting through the teleconference application Zoom. On the other hand, the Vietnamese delegations themselves held an offline conference at the National Economic University.

“In 2020, the conference is divided into three pillars, which are circular economy, industrial revolution 4.0, as well as entrepreneurship and politics,” wrote Rellisa in a release received by the Unpad Public Communication Office.

At the meeting, the delegates attended various events, such as presentations on the three main political pillars, brainstorming related to projects, as well as focused group discussions on project proposals to be made.

Of the three pillars discussed, Rellisa was interested to choose the topic of the industrial revolution 4.0. Furthermore, the delegates were grouped into groups according to the pillars.

“Each topic group discussed what projects could be done to overcome problems in ASEAN and to utilize technology. In this conference, we are more focused to brainstorm about projects that we can undertake for the advancement of ASEAN,” said Rellisa. (arm)*

You can read the original article in Indonesian here: